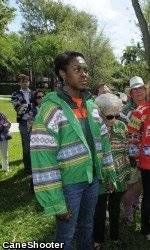 “I am so excited for Syl,” said Miami Head Coach Katie Meier, who was tapped into Iron Arrow just last year. “She has made such an impact on the Miami campus and has done so with class and humility.”

Bullock, a senior forward, has been the glue that has kept the Hurricanes together the last four seasons. Her leadership on and off the court is one of the main reasons the Canes went from worst to first in the conference a season ago and has been a key to UM maintaining its high level of play into this year. The Alaska, Anchorage native currently leads the Hurricanes with 43 blocks on the season and her 119 career blocks rank fourth in program history.

Bullock in on pace to earn her degree in English Literature this May.

Founded by UM’s first president, Bowman Foster Ashe, in 1926 only a month after the University opened, the Iron Arrow Society is steeped in the rituals of the Seminole Indian tribe and honors individuals who best exemplify the five qualities of Iron Arrow: love of alma mater, character, leadership, scholarship, and humility. Members are easily identified by their brightly colored Seminole jackets that are worn at official functions.