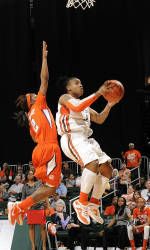 LOS ANGELES – The University of Miami’s Shenise Johnson and Riquna Williams are among the nation’s Top 15 players that are included on the John R. Wooden National Ballot, as announced by The Los Angeles Athletic Club on Monday.

Both senior guards we named First Team All-ACC – the third straight time for Johnson and second for Williams – after leading the Canes to a 25-4 regular season record.

Johnson was a Wooden finalist last season, but it is the first appearance on the final ballot for the 5-6 Williams.

In her career, Johnson became just the third woman in Division I history to score 2,000 points, grab 1,000 rebounds and dish out 500 assists.

Williams, known for her explosiveness, joined Johnson in reaching the 2,000-point plateau, scored over 30 points on two occasions this seaosn. She dropped a career-best 36 in a win over No. 11 Rutgers and later in the season, tied a career-high with eight three-pointers on her way to 34 points. Those performances were the top two scoring outings among any ACC player this season.

The 36th annual Wooden Award Gala, will take place on Friday, April 6, 2012, and will honor winners, All Americans, and the Legends of Coaching honoree Geno Auriemma of Connecticut. The Women’s John R. Wooden Award winner will be announced at the Gala event.