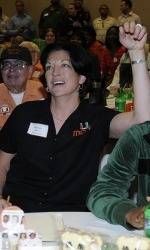 Join the Canes for a "Selection Monday" Celebration on March 12

CORAL GABLES, Fla. – The University of Miami will again host an NCAA Selection Show party for the women’s basketball team at the Newman Alumni Center on Monday, March 12. Doors will open at 6:30 p.m.

The Hurricanes have had another successful season under Head Coach Katie Meier. They are currently ranked No. 7 in the nation and have a 25-5 overall record, with three players on All-ACC teams. Seniors Shenise Johnson and Riquna Williams were voted onto the first team for the second consecutive season (Johnson has made three straight appearances), while junior guard Stefanie Yderstrom was named to the third team.

The Women’s Basketball Selection Show will be aired live on ESPN at 7 p.m. on March 12. Last season the Canes earned a No. 3 seed in the tournament and this year, they have been projected to be as high as a No. 2.

The event is open to the public, but those wishing to attend must R.S.V.P. to the Hurricane Club at (305) 284-6699 by Wednesday, March 7. Complimentary hors d’oeuvres and soft drinks will be served.

Parking is available to the public in campus lots after 6 p.m.

For First and Second Round ticket information, click here.