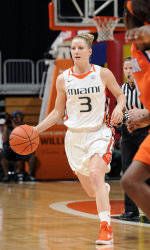 GREENSBORO, N.C.– The drama and upsets continued into the evening session of the ACC Women’s Basketball Tournament quarterfinals as the seventh-seeded Wake Forest Demon Deacons knocked off the second-seeded Miami Hurricanes, 81-74 Friday night in the Greensboro Coliseum.

Senior Secily Ray scored 17 of her season-high 21 points in the second half to lead Wake Forest to the tournament semifinals for the first time since 1988. This is the first time in history that both of the top two seeds have failed to advance to semifinal play.

Miami came from down 15 at halftime to take the lead with just under five minutes remaining. But sparked by a technical foul on Miami junior Shawnice Wilson and Sandra Garcia’s resulting converted free throws, the Demon Deacons closed out the game on a 16-8 run. Wake Forest, which was 20-of-24 from the line in the game, made 10 of 11 free throws in the final five minutes. The Deacs also got huge blocked shots from Ray and Mykala Walker in the final two minutes to help secure the victory over the nation’s seventh-ranked team.

“We beat a great team today,” Wake Forest coach Mike Petersen said. “I think credit has got to go to Miami. That is a great basketball team. They have great players. They played hard. They are well coached. They never shook. We didn’t shake. That was a pretty high-level basketball game I thought. Our energy level was good. Our sense of urgency was so good. When plays needed to be made, they got them made. I can’t sit here and tell you that we just had this wonderful game plan, we just tricked them. We took a really good basketball team out there, and they played super hard. We beat a really good basketball team.”

“I have a saying that the most excited team wins and Wake Forest was way more excited than us and they won,” Miami coach Katie Meier said. “All the hustle stats were in their favor. The bench stats were ridiculously uneven…They played very, very well. But that first half, I didn’t know my team and I didn’t like them. The score was very indicative of our effort. In another era, I might have patted our team on the back for that second half, but not now. No way. So we’re very disappointed. We’re feeling discouraged and we deserve what happened to us tonight.”

It took a team-effort by the Demon Deacons to pull off the upset. Led by Garcia, who notched her third double-double of the year with 14 points and 10 rebounds and sophomore Chelsea Douglas (18 points), the Wake bench outscored Miami 34-2. Junior Lakevia Boykin poured in 16 points and three steals and Ray grabbed eight rebounds to go along with her team-high 21 points.

Senior Riquna Williams scored a game-high 22 points for the Hurricanes, who lost for just the second time in the last 16 games. Senior Shenise Johnson and junior Stefanie Yderstrom scored 18 apiece for Miami.