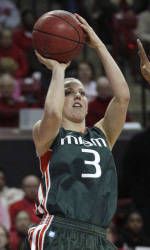 GREENSBORO, N.C. – University of Miami junior guard Stefanie Yderstrom has been named to the All-ACC Women’s Academic Women’s Basketball Team, as announced by the Atlantic Coast Conference on Thursday.

The Ostertalje, Sweden native has been selected to the all-academic team for the second straight season and it marks the third consecutive year that a Hurricane has been honored. Morgan Stroman was named to the squad in 2010.

Yderstrom had a breakout year for the Canes. The 5-8 sharp-shooter led the ACC with 56 made three-pointers and earlier this week was named to the All-ACC Third Team after scoring 10.8 points per game during the regular season.

To be eligible for consideration for the academic squad, a student-athlete must have earned a 3.0 grade point average for the previous semester and maintained a 3.0 cumulative average during her academic career.

Yderstrom, Sports Administration major, sports an overall GPA of 3.28 and a was named to the Dean’s List last semester with a 3.66 GPA.

Miami, a No. 2 seed in the ACC Tournament, will face the winner of today’s game featuring No. 7 seed Wake Forest and No. 10 seed Virginia Tech. Tip-off is set for Friday at 6 p.m. and the contest will be televised on FS Florida and FS South.