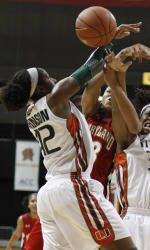 GREENSBORO, N.C. – For the third consecutive season, the University of Miami’s Shenise Johnson has been named to the All-ACC Defensive Team as announced by the Atlantic Coast Conference on Wednesday.

Johnson led the league with 3.5 steals and just two days ago was named First Team All-ACC for the third time – becoming just the 11th woman in conference history to accomplish the feat.

The Henrietta, N.Y. native also pulled down a team-leading 7.9 rebounds per contest and has recorded eight double-doubles on the season.

The senior picked the pocket of her opponents five or more times in seven games this season, including a conference-best seven times in Miami’s win at Maryland earlier this month.

Last season, Johnson became the first Hurricane to be named to the all-defensive team more than once and for the second straight year is the only repeat honoree among those honored.

Duke’s star freshman Elizabeth Williams was the named the ACC Defensive Player of the Year, while Alicia DeVaughn (Maryland), Lexie Gerson (Virginia) and Natasha Howard (Florida State) rounded out the rest of the all-defensive squad.

The 35th Annual ACC Women’s Basketball Tournament tips off at approximately 11 a.m. ET on Thursday, March 1, and will conclude with a 2 p.m. championship contest on Sunday, March 4. Each of the first and second round games will be broadcast on Regional Sports Networks. Both semifinal games will be aired on ESPNU at 11 a.m. and 1:30 p.m. on Saturday and the championship game will be broadcast on ESPN2.