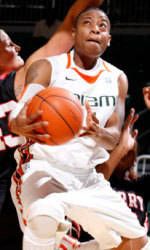 GREENSBORO, N.C. – For the second straight season, the University of Miami placed three players on the All-ACC Women’s Basketball Team, as announced by the conference office on Monday. Seniors Shenise Johnson and Riquna Williams once again earned first team honors, while junior guard Stefanie Yderstrom represents the Canes on the third team.

“To have three of the Top 15 players in the best conference in the country is a testament to how hard each of these young women has worked,” said Miami Head Coach Katie Meier. “Not to be overlooked is the wonderful job our assistant coaches have done to put these special players in a position to succeed.”

The three All-ACC selections for the seventh-ranked Hurricanes are tied with No. 5 Duke for the most among the conference’s 12 schools.

Williams was the ACC’s third-leading scorer at 16.4 points per game. Regarded as one of the most explosive players in the nation, Williams put up the ACC’s highest two point totals on the season, scoring 36 points in a win over No. 11 Rutgers in December and then 34 a month later in the Canes’ win over No. 5 Maryland – the program’s first-ever win over a Top 5 team. Her seven career ACC Player of the Week nods are the most of any current ACC players.

Yderstrom finished the regular season averaging 10.8 points per game while leading the ACC with 65 three-pointers on the season. The native of Sweden has started 72 consecutive games for the Hurricanes. In the 10 games since All-ACC forward Morgan Stroman was lost for the year due to injury, Yderstrom has poured in 14 points per contest – including a career-best 26-point effort in a win at No. 8 Maryland.

The All-ACC teams are voted on by the league’s head coaches and the “Blue Ribbon Panel”, which consists of national and local media members, as well as school representatives.