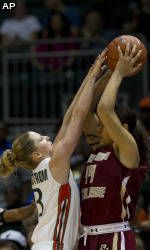 CORAL GABLES, Fla. (AP)– When her Senior Day ceremony was over, Shenise Johnson wrapped her arms against Miami coach Katie Meier and lifted her off the ground.

Fitting, since Sunday was just another example of how far Johnson and the Miami senior class has lifted the Hurricanes.

Riquna Williams scored 20 points, Johnson added 19 and No. 5 Miami capped its Atlantic Coast Conference regular season with a 88-42 win over Boston College on Sunday. It was the 40th straight home win for the Hurricanes (25-4, 14-2), who bounced back from Friday’s loss at No. 7 Duke by grabbing a quick 14-0 lead and never looking back.

About the only thing that didn’t go according to plan for Miami: Meier struggled to keep emotions in check when taking her seniors off the floor for the final time.

“They’ve developed, they’ve grown, they’ve represented,” Meier said. “We’ve been through so much. There’s just things you couldn’t even imagine that we’ve gone through behind the scenes. We all hung in with each other. We just had a pact, we were going to get through this, we were going to build this program and we were going to do it the right way. And I’m just so proud right now. I’m so proud. But we’re not done.”

Stefanie Yderstrom scored 13 points for Miami, which will be the No. 2 seed in the ACC tournament and play a quarterfinal game on Friday in Greensboro, N.C.

The Eagles will finish with their worst record in 17 years, barring an unlikely run through the ACC and NCAA tournaments. Boston College has lost 25 of their last 32 games against conference opponents and has never finished over .500 in ACC play.

So maybe this outcome was predictable.

“We just basically said, `Go out there and have some fun,”‘ Boston College coach Sylvia Crawley said. “We had nothing to lose, everything to gain. Sometimes senior nights can backfire because it is so emotional.”

Playing in their final home games as Hurricanes, Williams and Johnson combined for 25 points in the first half, outscoring Boston College by three over that span. It was 45-22 at the intermission, after Miami – which went 11 deep in the opening 20 minutes – shot 55 percent and Boston College committed 15 turnovers.

Miami cashed in those giveaways early and often, outscoring the Eagles 18-0 in points off turnovers, 12-2 in the paint and 9-0 on fast breaks in the half.

And as if there was any doubt, the Hurricanes opened the second half on an 11-0 run, Johnson scoring seven of those points as Miami stretched the lead to 56-22 with 17:08 left to play.

The starters came back with about 8 minutes left for one more short stint. When the seniors were subbed off their home court for the last time, Meier motioned for the crowd to stand and cheer, then dabbed at her own eyes.

“Words can’t even express how much she’s done for me off the court,” Johnson said. “She’s not just a coach and I think that’s most important. She’s helped build character, she’s helped instill things that my parents haven’t instilled and she’s been a mom away from home. I appreciate her and I love her for it.”

Now Miami can turn attention toward its biggest goal, the postseason.

The Hurricanes are 53-9 since the start of last season, that win total alone eclipsing the 50 put up in a four-year span before Johnson and Williams arrived on campus as freshmen. Miami made the WNIT championship game two years ago, lost in the second round of the NCAA tournament last season and figures to have a shot at making perhaps the deepest NCAA run in school history this time around.

The Hurricanes have reached the round of 16 in the NCAA only once – 20 years ago.

“We want to go the furthest that anyone has ever gone at Miami,” Meier said. “And so we have an eagerness, a hunger. I don’t think another team in the country had more fun playing today than the University of Miami women’s basketball team. We had a great time together.”