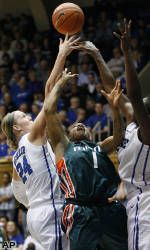 DURHAM, N.C. (AP)– Elizabeth Williams scored 19 points and No. 7 Duke held on to beat No. 5 Miami 74-64 on Friday night, clinching the top seed in next week’s Atlantic Coast Conference tournament.

Duke shot 48.5 percent, forced 21 turnovers, outscored Miami 50-16 in the paint and held the Hurricanes to one field goal in the final 9 1/2 minutes to extend its winning streak in ACC home games to 30.

Riquna Williams’ layup with 4 minutes remaining was the Hurricanes’ only basket down the stretch.

Miami trailed 67-53 with 5 1/2 minutes left but reeled off 11 straight points – all but two coming at the foul line – to make things tense for a while. Sylvia Bullock’s free throw with 1:52 remaining pulled the Hurricanes to 67-64.

“Boy, we had the opportunities. We did at the end,” Miami coach Katie Meier said. “We flipped the switch and we were Miami and the pressure was on them and you’ve got to make those magical plays.”

Gray followed with a driving layup with 1:15 left, and after two misses by Riquna Williams, Gray and Tricia Liston combined to hit five of seven free throws to seal it.

“It’s hard to contain her,” Johnson said of Gray. “One minute she’s surveying, the next minute she’s at the rim.”

Stefanie Yderstrom finished with 16 points for Miami, the conference’s second seed for the second straight year. The Hurricanes fell to 0-9 against Duke, and coach Katie Meier – an All-American player for the Blue Devils – slipped to 0-8 against her alma mater during a coaching career that also includes a stint at Charlotte.

Facing the Blue Devils as a top-10 team for the first time – and taking on a Duke team that is without three starters – this figured to be the Hurricanes’ best chance to beat them. Instead, it wound up being another empty trip to North Carolina’s Triangle, the site of both of Miami’s league losses. North Carolina beat the Hurricanes in January.

“We’re not coming out of this game with our heads down at all,” Meier said. “I thought we did what we needed to do. I’m very proud of our effort, very proud of the game plan. We wanted to hang around … and then generate opportunities at the end. It was just how we scripted it.”

Allison Vernerey finished with 10 points while Elizabeth Williams reached double figures for the 13th straight game for the Blue Devils, who finished 13-1 at Cameron Indoor Stadium this season, with their lone loss coming to No. 4 Connecticut. Duke wraps up the regular season Sunday against the rival Tar Heels.

Duke turned to its defense midway through the first half to take the lead for good and push it into double figures. The Blue Devils forced seven turnovers during a 22-5 run that erased an early seven-point deficit.