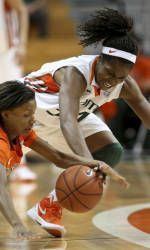 CORAL GABLES, Fla. – The University of Miami is offering free admission to the public for the women’s basketball Senior Day game against Boston College on Sunday, Feb. 26 at 1 p.m.

Three seniors will be making the final appearances of their careers at home against  the Eagles, who the Canes beat earlier this season by a score of 88-57 at Conte Forum in Chestnut Hill, Mass. Riquna Williams, Shenise Johnson and Sylvia Bullock will all be playing their last games in orange and green at the BankUnited Center.

The three seniors were pivotal in the Canes’ rise from the cellar of the ACC in 2009-10 to co-conference champions in 2010-11. Johnson and Williams, both Preseason First-Team All-ACC selections, became the fourth and fifth Hurricanes respectively to crack the 2,000-point plateau earlier this season. Bullock, who came to Miami from her native Anchorage, Alaska, has started the past 60 games of her career for the Hurricanes.

All tickets to the game will be offered free of charge at the gates, which open at noon on game day. For more information, contact the Hurricane Ticket Office at 1-800-GO-CANES.