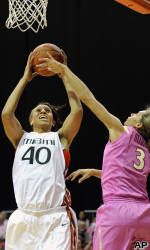 No. 6 Miami Pushes Past FSU as Meier Wins 200th

CORAL GABLES, Fla. (AP)– The Miami Hurricanes were clinging to a one-point lead with 3:43 left in Sunday’s game when the public-address announcer reported a defeat for Duke, which tightened the race atop the Atlantic Coast Conference standings.

“I was kind of wondering why the crowd was cheering so loud,” Meier said with a smile. “I didn’t see a dog-catching Frisbee out there.”

Maybe it was a coincidence, but the No. 6-ranked Hurricanes didn’t allow a point the rest of way and beat Florida State, 67-60.

The Hurricanes (24-3, 13-1) pulled into a tie for the league lead with No. 5 Duke, which lost at Maryland. Miami plays at Duke on Friday.

“If we want what we want, we were going to have to win at Duke whether they won or lost today,” Meier said. The Blue Devils’ defeat makes it likely Miami will move into the top five for the first time ever.

The Hurricanes earned their 39th consecutive home victory by taking advantage of 24 Florida State turnovers. Miami scored 21 points off turnovers to four for the Seminoles.

“That has to happen for us to win,” said Shenise Johnson, who had 23 points and 10 rebounds. “We have to create turnovers and push the tempo. Seventy-five feet of the court has to be ours, because from 15 feet in – we’re a lot smaller than everybody else. So we want to try to speed the game up. That’s what we do. That’s Miami basketball.”

Florida State outshot Miami and outrebounded it, but turnovers more than compensated for the disparity. The smaller, quicker Hurricanes used their full-court press repeatedly to create offensive chances, and they outscored Florida State 13-0 on fast breaks.

The Hurricanes also outscored the Seminoles by 15 points from 3-point range, where Florida State went 0 for 5.

“We had a lot of costly turnovers, and that was the difference,” Seminoles coach Sue Semrau said. “They did a great job of keeping us busy on the perimeter.”

Riquna Williams scored 24 points for the Hurricanes, combining with Johnson to give them a potent one-two punch, as usual.

“We were both aggressive,” Johnson said. “We were looking for each other. We did a great job of knowing where each other was.”

“It feels old,” she said with a smile.

FSU’s Natasha Howard had her 11th double-double of the season with 19 points and 13 rebounds, but she committed six turnovers. Cierra Bravard had 12 points and Chelsea Davis 11 for the Seminoles, who never led in the second half.

Alexa Deluzio’s basket capped an 8-0 run that allowed Florida State to briefly tie it at 57 with 5:20 left, but that was their final basket. Miami regained the lead for good with 4:10 to go on a follow shot by Williams, and the Hurricanes sealed the win by sinking five of six free throws in the final 35 seconds.

“If you have a season like we’re having, you’re going to win in a lot of different ways,” Meier said.

Miami raced to an 8-2 lead then fell behind 19-16. Williams and Johnson sank 3-pointers in the final 70 seconds of the first half to give the Hurricanes a 36-31 halftime advantage.

Williams converted a three-point play and sank a 3-pointer on consecutive possessions to make it 50-39 – Miami’s biggest lead.

200 and Counting
Miami Head Coach Katie Meier won her 200th career game on Sunday. Now in her seventh season at UM, Meier has won 124 games since coming over from Charlotte – where she first became a head coach.

Double-Trouble
With 23 points and 10 rebounds, All-American Shenise Johnson recorded her 8th double-double of the season and the 35 of her career – most of any current ACC player.

Just What They Needed
The Hurricanes turned the ball over only nine times in Sunday’s game, while forcing the Seminoles into 24. The Canes severely outpaced Florida State by scoring 21 points off of those turnovers, compared to only four points for the visitors.

Not in Our House
The win extended Miami’s home win streak to 39 games. After St. John’s upset over Connecticut on Saturday, the Canes now own the second longest streak in the nation, trailing only Stanford’s 76.