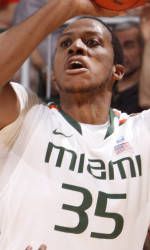 The Game
Miami looks to get back to its winning ways this Saturday when Wake Forest comes to the BankUnited Center for a 1 p.m. tip off. The Canes won five-straight games, then lost to a pair of nationally-ranked teams at Florida State and against North Carolina.

The Series
Miami is 5-8 against Wake Forest overall and 4-1 against the Demon Deacons in the past five outings. The Canes last defeated Wake Forest in Coral Gables on Jan. 9, 2010.

The Broadcasts
Catch the game on RSN with Rich Waltz and Debbie Antonelli making the call. Check out RSN affiliates here: http://bit.ly/wo7Wdv. The game will also be carried live by 560 WQAM Radio with Joe Zagacki (play-by-play) and Josh Darrow (analyst), 90.5 WVUM, 106.3 CIMA FM, Sirius 92 and XM 190.

The Coach
Head coach Jim Larranaga is in his 28th season as a head coach and first at Miami. He has a 484-343 overall record and holds a 457-317 record in D-I games. Coach L was also the head coach of D-II American International (27-26) for two years.