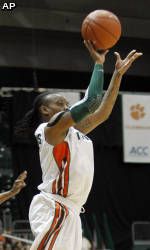 The junior guard scored a career-high 26 points and Shenise Johnson added 20 points and seven steals to help the sixth-ranked Hurricanes rally to beat No. 8 Maryland 76-74 on Sunday.

“Stef had an awesome performance today,” Miami coach Katie Meier said. “She was incredible and focused. You’ve got to talk about her when you talk about the Miami guards being so good.”

Miami seniors Johnson and Riquna Williams were already on the top of every opponent’s scouting report having scored over 2,000 points apiece in their illustrious careers. Now the Hurricanes have a third option with Yderstrom.

“She’s having a tremendous season,” Maryland coach Brenda Frese said. “We came into the game wanting to defend the `Big 3′. We call it the `Big 3′ because she’s having a sensational junior campaign. She played a pretty flawless game.”

Yderstrom set her previous career-high of 22 three weeks earlier against Virginia Tech and has been in double figures in five of the last six games.

“I feel it’s been a few weeks and I’ve been getting up extra shots with assistant coaches,” Yderstrom said. “I want to be aggressive.”

The Hurricanes (22-3, 11-1) have won 11 straight games since falling to North Carolina by two points on Jan. 2. They remained a game behind Duke for the Atlantic Coast Conference lead.

Trailing 66-60 with 6 minutes left, Miami rallied behind Johnson. The preseason All-America’s jumper from the corner with 2:07 left gave the Hurricanes their first lead since early in the first half and set up a tense finish.

“Just another typical Miami-Maryland game,” Meier said. “This was round three or four.”

Anjale Barrett’s layup with 54 seconds to go put Maryland (21-4, 8-4) ahead 72-71. But the Hurricanes took the lead for good on Sylvia Bullock’s jumper 15 seconds later. After two missed shots by the Terrapins, Johnson hit two free throws to make it 75-72.

Laurin Mincy missed a 3-pointer that would have tied the game, and Williams hit a free throw to seal the win.

Tianna Hawkins scored 18 points and Lynetta Kizer added 16 to lead Maryland, which had a season-high 11,000 fans at the game.

Leading by five points at halftime, Maryland was able to extend the advantage to 50-42. The Terrapins had chances to make it a double-digit lead but kept missing layups and free throws that allowed Miami to stay in the game. Maryland missed six layups and seven free throws in the second half.

“Late-game free throws, layups, turnovers, those are costly to put a team away in your building,” Frese said.

Yderstrom started the Hurricanes’ rally hitting consecutive jumpers. Williams’ hit a 3-pointer to get Miami within 50-49.

The teams traded baskets, but Miami couldn’t pull ahead. A layup by Hawkins and a free throw by Alyssa Thomas gave Maryland a 66-60 lead with 6:05 left before the Hurricanes’ late rally.

It was an entertaining back-and-forth first half with neither team able to build more than a six-point lead. Thomas kept the Terrapins in the game early, scoring eight of the team’s first 10 points before Kizer took over. The 6-foot-4 senior’s strong three-point play tied the game at 13. She scored four points over the final 1:42 of the half to help Maryland take a 38-33 lead. Kizer finished the half with 14 points and nine rebounds.

Miami won the first meeting between the teams on Jan. 12, handing Maryland its first loss of the season. In that game Kizer had just four points and four rebounds in 16 minutes.

“We felt we gave everything pretty much, it definitely hurts,” Kizer said. “This is one we will keep in our back pocket and come out stronger.”