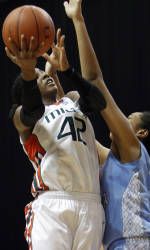 CORAL GABLES, Fla. – Miami Hurricanes Shenise Johnson and Riquna Williams have been named to the U.S. Basketball Writers Association Midseason Watch List for the Women’s National Player of the Year.

The backcourt duo has led the Hurricanes to a 21-3 overall mark and a program record 38-game home win streak. Johnson and Williams rank fourth and fifth in the conference with 16.7 and 15.6 points per game respectively. The two became fourth and fifth players in team history to reach the 2,000-point plateau.

Johnson joins Colorado’s Chucky Jeffery as the only players from BCS Automatically Qualifying Conferences to rank among the Top 10 in points, rebounds and assists.

Williams led the Canes to wins over No. 11 Rutgers and No. 5 Maryland with 34 and 36 points respectively. Her performance against the Terps was fueled by a career-record tying eight three-pointers, it was also Miami’s first ever win over a Top 5 team.

Members of the association’s board of directors chose the players to be included on the list as contenders for the trophy, which will be presented to the national player of the year in Denver at the USBWA’s Women’s College Basketball Awards Breakfast on April 3.

While these standout players are the leading contenders to be named to the USBWA’s All-America Team and as finalists for the Women’s National Player of the Year award, all Division I players remain eligible for postseason honors from the USBWA. The association will announce its 2012 All-America Team in mid-March. At that time, finalists will also be chosen for the player of the year. Once finalists are announced, the entire USBWA membership will vote for the winner of the National Player of the Year.

Since the 1987-88 season, the USBWA has named a Women’s National Player of the Year. In each of the last three seasons, a Connecticut Player has won the award. Maya Moore took home the honor in 2009 and ’11, while Tina Charles was the player of the year in 2010.

The Hurricanes head to Maryland this Sunday in a rematch with the nation’s No. 8 team.