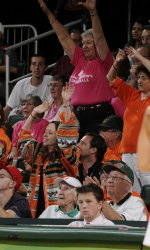 Women's Hoops to Raise Attendance and Awareness vs. FSU

CORAL GABLES, Fla. – The No. 6 University of Miami women’s basketball team is set to begin the “Strive for Five” and “Play 4 Kay” ticket promotions in an effort to both set the attendance record for a women’s basketball game and raise money for the Kay Yow Cancer Fund.

The Hurricanes will sell $1 advance tickets to all fans for the game against Florida State on Feb. 19. at 3:30 p.m. with the goals of having at least 5,000 fans in attendance and raising $5,000 for breast cancer awareness. Day of game tickets will be sold at $5, with four of those dollars being donated to the Kay Yow Cancer Fund. Fans are encouraged to wear pink in an effort to raise awareness during the televised game.

Miami (21-3, 10-1 ACC) is currently on a 10-game winning streak and has won 38 straight games in the BankUnited Center – the third best streak in the nation behind only UConn and Stanford.Those interested in purchasing a ticket or to the cause can do so by clicking here or by calling 1-800-GO-CANES. The previous attendance record for the Canes was set on Feb. 19, 2003 in a game against the then No. 1 ranked and undefeated UConn Huskies. The attendance for that game was 4,973.

The team is led by seniors Shenise Johnson and Riquna Williams, who were both named to the Women’s Midseason Nominee List for the 2011 John R. Wooden Award last week, an honor only given to the Top 20 players in the nation. Johnson recently scored her 2,000th-career point and leads the team with 16.6 points per game this season. Williams is the team’s second leading scorer with 15.9 points per game and surpassed the 2,000th-point milestone on Sunday.