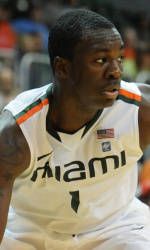 The Game
Miami returns to the BankUnited Center on Wednesday, Feb. 1 to face Maryland at 8 p.m. The Canes look to make it three-straight ACC victories after a pair of wins on the road at Boston College and Georgia Tech last week.

The Series
Miami leads the all-time series with Maryland 11-7, winning five of the last seven meetings. The Canes most recently downed the Terps, 80-66, last March in Coral Gables, Fla.

The Broadcasts
Catch the game on the ACC Network (Raycom) and ESPN3 with Bob Rathbun and Cory Alexander making the call.
The game will also be carried live by 560 WQAM Radio with Joe Zagacki (play-by-play) and Josh Darrow (analyst), 90.5 WVUM and 106.3 CIMA FM.

The Coach
Head coach Jim Larranaga is in his 28th season as a head coach and first at Miami. He has a 482-341 overall record and holds a 455-315 record in D-I games. Coach L was also the head coach of D-II American International (27-26) for two years.

Promotions
The first 2,000 fans inside the BankUnited Center will take home ACC tournament pennants.In honor of ACC Day, the celebratory pennant will feature the date, time and location of the 2012 Men’s Tournament. For the first 750 students at the game, rally towels will be given away before the 8 p.m. tip-off.