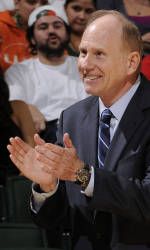 CORAL GABLES, Fla. – The University of Miami and head men’s basketball coach Jim Larranaga have agreed to terms on a three-year contract extension that will run through April 30, 2019. Larranaga, who took over the UM program in April of 2011, has led the Canes to an 11-7 record during his debut season.

“Jim Larranaga is a tremendous basketball coach and an even better person,” said Director of Athletics Shawn Eichorst. “He has been a great teacher and leader of our student-athletes and he has continued to passionately expand the brand of our men’s basketball program both on campus and in the community. Jim is a first-class representative of our University and we look forward to having him at the helm of our program for many years to come.”

“My staff and I are very happy to be a part of the Miami Athletic Department family. There is such a great athletic foundation here,” said Larranaga. “We are also very excited about competing in the ACC against some of the best basketball programs in the country. I’m thrilled with this three-year extension and the commitment it shows to our program. My staff and I are confident we can build the type of program that will be a source of pride for the entire University.”

Coach Larranaga will be available to the media on Friday at noon in the media room of the BankUnited Center.