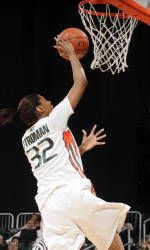 CORAL GABLES, Fla. – University of Miami forward Morgan Stroman will undergo surgery on Tuesday to repair a torn Achilles tendon in her left leg and will be sidelined for the remainder of the 2011-12 season. The junior is expected to make a full recovery and return next season.

Stroman was injured in the late minutes of Miami’s win at Virginia on Jan. 19.

“Our Miami family feels terrible for Morgan,” said Head Coach Katie Meier. “She’s such a special player and person and she will be missed on the court. Morgan has already addressed her teammates and asked them to step up in her absence.  I know they will honor her request.”

The 6-1 forward from Hopkins, S.C. was one of three players on the Hurricanes averaging double-figures in scoring (12.9 ppg), and was second on the team with 6.5 rebounds per game.

As a sophomore, the former McDonald’s All-American was named Third Team All-ACC, joining Shenise Johnson and Riquna Williams on the all-conference teams.

Miami will likely look to 6-6 junior Pepper Wilson and 6-1 sophomore Maria Brown to fill the void left by Stroman during her rehabilitation.

The Hurricanes will face Virginia Tech on Monday and Wake Forest on Thursday as part of a two-game homestand this week. Both games are scheduled to start at 7 p.m.