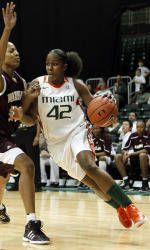 CORAL GABLES, Fla. – Shenise Johnson scored her 2000th-career point during a 24-point performance and Hurricane victory at Florida State last Sunday. The All American’s achievement makes her the fourth women’s basketball player in University of Miami history to reach that goal.

The 10th-ranked women’s team hopes to pack the house on Monday with 2,000 fans to match Johnson’s accomplishment.

Complimentary admission vouchers for the women’s matchup versus Wake Forest are available for the first 2,000 fans. Vouchers will be available at the BankUnited Center on Sunday during the men’s basketball game or at the Hecht Athletic Center until 5 p.m. on Monday, January 23. The voucher form must be completed and redeemed at the pass list gate to receive complimentary admission.