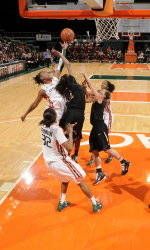 CORAL GABLES, Fla. – After a monumental win against Maryland put an end to the program’s winless streak against Top-5 opponents, the No . 11/13 Miami Hurricanes make the short trip to the state capital determined to end a similar streak on Sunday.

January 29, 1987 was the last time the Hurricanes won in Tallahassee, a game that no player on the current roster was alive to see. The Canes were under the tutelage of famed head coach Lin Dunn, now with the WNBA’s Indiana Fever. Current Head Coach Katie Meier was just a freshman in the middle of her tremendous first season at Duke University, where she would finish with ACC Rookie of the Year honors.

Almost 25 years later, the Hurricanes enter the Tucker Center prepared for another battle against a perennially tough conference opponent. Though they boast just a 10-8 record through their first 18 games, the Seminoles are led by two upperclassmen scorers that could provide matchup problems for the Hurricanes.

Six-foot-4 forward Cierra Bravard, a Preseason First-Team All-ACC selection, has lived up to the billing in her final year as a Seminole. The Ohio native is averaging 15.3 points and 7.1 rebounds per game, good for fifth and 11th best conference totals respectively.

Redshirt junior Alexa Deluzio has also been a key contributor for the Noles. The sharpshooting 5-foot-11 guard, originally from nearby Orlando, ranks ninth in the ACC with 13.6 points per game.