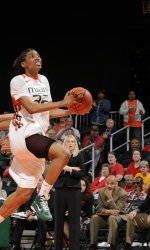 CORAL GABLES, Fla. – For Head Coach Katie Meier, tomorrow night’s conference battle against No. 5 Maryland at the BankUnited Center (7 p.m.) is important for one simple reason – it’s another chance for No. 11/13 Miami to prove themselves in the Atlantic Coast Conference. If anyone thinks otherwise about the team’s showdown with the Terrapins, they won’t hear it from Coach Meier.

“We’re so blessed to have an opportunity to play an awesome team, and we embrace it,” Meier said. “We’re excited about it.”

What about the impact of beating a team ranked in the top five nationally, undefeated through 16 games for the first time since 2006-07?

“Whatever people have said about them this year, they’re always good,” Coach Meier said. “It’s a matchup of two very good basketball teams. It happens night in, night out in the ACC.”

But there has to be a different kind of pep in the girls’ step getting ready for tomorrow night, right?

“This is what makes our approach special with the way our kids are,” said Meier. “It doesn’t change. When you’re so used to playing ranked teams in the ACC, it’s never a mentality like ‘oh my gosh, we have Maryland.’

The Hurricanes have successfully adopted their coach’s mentality of consistency, and are prepared for a match-up with another of the more talented teams in the ACC. Led by sophomore forward Alyssa Thomas, who ranks first in the conference in points per game (23.0) and seventh in rebounding (7.6), the Terps are off to a sizzling start through the first half of their 2011-12 schedule.

The impact of “reinforcers,” as Coach Meier calls them, will be huge on Thursday night.

“Our second wave has been real big in our conference wins. I think we know the talent of the starters on both sides,” Meier said. “If the bench can come in and make a statement, the game might turn on that.”

The Terps boast a similarly deep roster that has kept them shooting up the rankings with a perfect 16-0 record. Sophomore guard Laurin Mincy (14.6 points per game), one of four Terps averaging in double-figures, is another special player the Canes will need to lock down.

“They’ve had some huge games and some real big shots by Alyssa Thomas, but the shot before was made by Lauren Mincy,” Meier said. “She’s setting them up by having that last possession to win the game.”

If the Canes hope to leave the BankUnited Center with consecutive win 34 tomorrow night, they’ll need to maintain their thievery. The Canes, who lead the ACC with a whopping 16.0 steals per game, are facing a Maryland team with the fewest turnovers in the conference.