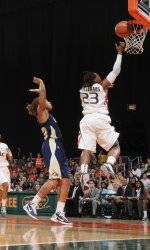 ATLANTA, Ga. – The scene was all too familiar for Head Coach Katie Meier. After her No. 12 Hurricanes had built a sizable 19-point lead by halftime, their adversary was mounting a serious second-half comeback bid.

“We’ve had quite a history with NC State the last couple of times we’ve played them, so we weren’t surprised with their comeback,” Coach Meier said. “This is the third game in a row we’ve had a lead on them and they fight back.”

Determined to avoid a similar result as their Atlantic Coast Conference opener on the road in Chapel Hill, the Canes played inspired basketball late in the contest, including a 12-0 run down the stretch, that sealed the first conference win of the season for Miami (12-3, 1-1 ACC).

“That was probably the first time all year we went to our offense to rely on getting us the win and came through,” Coach Meier said after her team’s 78-68 victory.
Four Canes registered double-digit points against the Wolfpack, including a game-high 22 from senior Riquna Williams. The team showed their depth on a night when reigning ACC Player of the Year Shenise Johnson recorded only 10 points, including a seven-point, 11-rebound output from center Pepper Wilson.

”The Hurricanes will need another strong offensive performance if they hope to defeat Georgia Tech on the road Monday. The Yellow Jackets (11-4, 1-1), coming off a tough road loss to No. 5 Maryland on Friday, are ranked No. 38 nationally in scoring offense at 73.9 points per game.

“We’re going to just keep putting together this season,” Coach Meier said. “Because we want to be exposed now, and good in late February and March.”