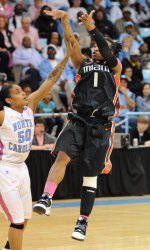 Miami Set for ACC Opener at No. 23 North Carolina

CHAPEL HILL, N.C. – Not often does a team ranked No. 12 in the country, returning its entire roster and coming off the first Atlantic Coast Conference championship in program history, have the chance to address its remaining doubters only two days into January.

But for Head Coach Katie Meier’s Miami Hurricanes, sporting only a 1-2 record against opponents ranked in the Top-25 so far this season, Monday’s matchup at No. 23/24 North Carolina (7 p.m.) will do just that: provide a rare early-season opportunity to establish itself once again as a dominant contender in conference play.

“We fought a couple hard ones and we accept them. But they’re very deep in our heart. We thank the people that taught us those lessons,” Meier said after the team capped the Miami Holiday Tournament with a 91-61 championship victory over VCU.

After falling on the road in mid-November to a Lady Volunteers team ranked No. 3 in the nation, the Hurricanes reeled off eight straight wins, including a double overtime victory over No. 11 Rutgers.

But when the Hurricanes traveled to square off with No. 17 Georgetown, the same team they beat in impressive fashion last December, the Canes endured their worst performance of the year to date. A 25-point loss dropped the team five spots in the rankings, down to their current No. 12.

“When someone beats us at anything, we’re competitive, so we’re going to talk about why they beat us and what we didn’t do well,” Coach Meier said. “If it’s our fault, we’re going to fix it.

Though they rebounded from the defeat by winning their two Holiday Tournament games by a combined 70 points, Miami has a bigger challenge on Monday night in the No. 23/24 Tar Heels. North Carolina, who dominated the Hurricanes in last season’s conference tournament semifinals, are coming off a Sweet Sixteen appearance and finished their nonconference schedule with a 10-2 record.

The Tar Heels are led by 6-foot-5 center Chay Shegog, averaging 17.1 points and 8.5 rebounds per contest. Brittany Rountree (11.0 points per game), named to the ACC Newcomer Watch List, is another key player for the Heels.

“It’s another opportunity to show who we are,” senior guard Shenise Johnson said of the team’s upcoming tilt. “Anytime we get put on the stage, we try to come out with passion and competitiveness.”

Though any team would like to go undefeated, Coach Meier recognizes the importance of the lessons learned on the road at Georgetown and Tennessee.