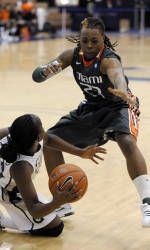 Canes Look to Get Back to Winning Ways vs. Holy Cross

CORAL GABLES, Fla. — After a disappointing loss at No. 17 Georgetown in its last contest, the 10th-ranked University of Miami women’s basketball team looks to claim its own Miami Holiday Tournament title to close out the 2011 calendar year.

After the loss to the Hoyas, the Canes dropped in the polls, to No. 12 in the Associated Press poll and No. 10 in the ESPN/USA Today Coaches Poll.
However, Miami has won 30 consecutive games inside the BankUnited Center and is looking for some momentum heading into the ACC schedule, which begins on Jan. 2 at No. 23 North Carolina.

Shenise Johnson and Riquna Williams will undoubtedly return to their dominant form after uncharacteristic shooting performances in Washington, D.C. Johnson still leads the conference with 17.1 points per game and has scored in double-figures in 82 straight contest – the longest current streak in the nation. Williams is scoring 16.4 points a night and is the most explosive athlete in women’s basketball this season.

Miami and Holy Cross haven’t faced a common opponent yet this season, but just last week, the Crusaders fell at Boston College 67-58, in a contest that was even closer than the final score represents. The lone ranked foe that Holy Cross faced this year was Geno Auriemma’s Connecticut squad, a game that ended in a 77-37 rout in favor of the Huskies.

The winner of the Miami/Holy Cross matchup will face the winner of VCU/Morgan State (Wednesday, 5 p.m.), Thursday at 7 p.m.