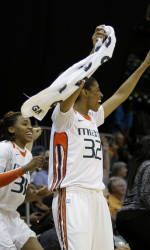 Seventh-Ranked Canes to Face-Off With No. 17 Georgetown

CORAL GABLES, Fla. — After finishing the previous season ranked last in the Atlantic Coast Conference, Head Coach Katie Meier’s Miami Hurricanes needed an early chance to prove that 2010-11 would be different. The team had reeled off six-straight wins after a close loss to No. 21 Nebraska, but needed a signature victory to stamp their out of conference schedule. When the No. 11 Georgetown Hoyas rolled into Coral Gables on Dec. 7, the Hurricanes seized the opportunity.

“You can’t deny what just happened on that court,” Coach Meier said after her last year’s 81-72 overtime victory. “I think you have to at least talk about Miami as a Top-25 team now.”

The Hurricanes wouldn’t appear in national polls until January 10th, entering the picture with an initial No. 22 ranking in the Associated Press’ Top-25. But after winning a share of the ACC championship and finishing the season with a ranking of No. 11, it’s safe to say the Hurricanes are no longer strangers to national attention.

“Last year we played Texas A&M, and they end up winning the thing [NCAA title], and I think this UM team could be a big contender for the national championship if they stay healthy,” Louisiana at Monroe Head Coach Mona Martin said. “I can’t say we’ve ever played a team that runs the floor that well, and I’ve been in this business 36 years.”

“From 1 to 5, that’s the fastest, most athletic team we’ve faced in my career,” Merchant said. “We’ve played Duke, and it’s not even close.”

The No. 7 Hurricanes (9-1) will need to utilize that high-octane offense if they hope to leave McDonough Arena victorious in a rematch with the No. 17 Hoyas on Wednesday night (5 p.m tip-off). The Hurricanes, boasting the nation’s highest scoring average at 86.9 points per game, are facing off against the 15th-ranked scoring defense in the country (50.7 points per game).

Georgetown (9-2) is led by Preseason All-BIG EAST selection Sugar Rodgers, averaging 16.5 points per game in the Hoyas’ backcourt. Senior forward Tia McGee (11.8 points, 7.2 rebounds) and freshman guard Taylor Brown (6.7 points per game) are two other key contributors for Georgetown, who entered the season ranked No. 10/11 but have slipped to No. 17 with two early losses.