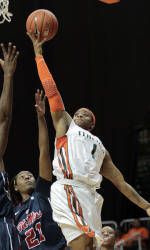 CORAL GABLES, Fla. — After a six-day break from game action, the Hurricanes return to the hardwood on Friday night for a matchup with the Warhawks of the University at Louisiana at Monroe at the BankUnited Center.

The Warhawks, who finished last season third in the Western Division of the Sun Belt at 16-15, lost three starters and return only eight letterwinners from a season ago. ULM (1-9) is led by a pair of seniors in 6-foot-2 center Larrie Williams (15.4 points, 6.1 rebounds) and guard Elizabeth Torres (11.4 points, 6.5 assists).

Starkly different from the Warhawks are Head Coach Katie Meier’s Hurricanes, whose starters have remained the same for each of the last 42 games and who return every letterwinner from 2010-11.

After facing USF, Michigan State, No. 11 Rutgers and Ole Miss in four of their past five games, the Hurricanes welcome a team from the Sun Belt Conference into town for a 7 p.m. tip-off.

“The adversity, I hope it’s not too much,” Head Coach Katie Meier said after her team’s difficult stretch. “That’s where the depth needs to come through. We couldn’t have done this last year.”

Despite the strong play of her starting five, notably Preseason All-ACC selections Riquna Williams (17.6 points per game) and Shenise Johnson (18.0 points per game), Coach Meier has often times counted on contributions from her bench to jumpstart the team. In the Hurricanes’ last outing against Ole Miss, it was the “reinforcers” (as Coach Meier describes them) that provided the spark to begin the second half.

“The game changed in the second half when our second wave went in,” Meier said. “They didn’t score, but they went in and played with some energy and wore the other team down.”

Among Coach Meier’s “reinforcers” is 6-foot-6 center Shawnice “Pepper” Wilson, who had her best game to date in a Miami uniform with 15 points and four rebounds in the Hurricanes’ 76-48 win over Ole Miss.

“Coming into Miami, I realized it was a different style of basketball,” Wilson said. “Our starting five has been here, they’re experienced, they’re our veterans. They know what Coach wants and what the system is. I’m still getting used to it.”

The Hurricanes will need to continue utilizing their depth, as a trip to Washington D.C. and a matchup with No. 17/19 Georgetown looms next Wednesday (Dec. 21).

“You know how some boats have two tanks of gas, and when one runs out, you have another one sitting right there?” Meier said. “I feel that way too. It’s nice, and it allows us to have this challenging of a schedule.”