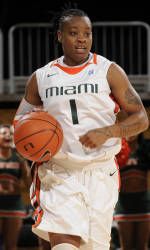 Williams, a Preseason All-ACC First-Team selection, scored a career-high 36 points in a 92-81 double overtime victory over No. 11 Rutgers at the BankUnited Center on Dec. 5. In the team’s next game against Ole Miss on Dec. 10, Riquna led all scorers with 17 points in a blowout 76-48 victory over the Lady Rebels.

The Pahokee, Fla. native is now averaging 17.6 points per contest in 2011, second-highest on the team and third-best in the conference. With her selection, Williams became the active conference leader as the only seven-time ACC Player of the Week honoree.

Already building a strong resume with their tough out-of-conference schedule, the No. 7 Hurricanes have a home contest against Louisiana-Monroe on Dec. 16 before a trip to Washington, D.C. and a showdown with BIG EAST foe No. 17 Georgetown on Dec. 21.