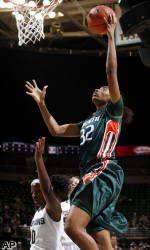 No. 9 Canes Face No. 11 Rutgers at the BankUnited Center

CORAL GABLES, Fla. — A finish near the top of the conference during the regular season followed by a disappointing semifinal exit in the conference tournament. A 20-win season and a trip to the 2011 NCAA Tournament ending all too abruptly in the second round. A preseason Top-25 ranking and a team laden with McDonald’s High School All-Americans and expectations at an all-time high for the 2011-12 season.

When No. 9 Miami takes the court against No. 11 Rutgers tomorrow at the BankUnited Center (7 p.m.), the two teams will have a lot in common. Head Coach Katie Meier is proud of any comparison between her Hurricanes and Hall of Fame Coach C. Vivian Stringer’s Scarlet Knights.

“Rutgers has been a storied program for a long time now, and we haven’t been. I think the teams are similar right now and that’s a compliment to our progress,” Meier said. “They’ve been a standard for women’s basketball.”

The Hurricanes, returning home after their first Big Ten/ACC Challenge victory in program history with a 76-60 victory at Michigan State, are riding a five-game win streak into Monday night’s contest.

The Hurricanes have ended the most travel-heavy stretch of their schedule with impressive results; after a 92-76 loss on the road to the No. 3 Lady Volunteers, the Hurricanes have traveled to Alaska and Michigan for wins against BCS opponents (USF, Michigan State) with two victories in Coral Gables (Prairie View A&M, Longwood) sandwiched in between.

“The amount of miles we’ve flown already this season is incredible,” Meier said. “The mental toughness of my team has been really impressive. We have a real chance to be successful with some of these lessons on the road.”

The Hurricanes will need to use those lessons learned if they hope to leave the BankUnited Center victorious on Monday night. The undefeated Scarlet Knights are led by their Preseason Second-Team All-Big East center Monique Oliver (11.4 points, 8.4 rebounds) and the dynamic senior guard tandem of Khadijah Rushdan and April Sykes, both averaging 13.3 points per game.

“This is a big challenge for us. It’s going to be an emotional game, because Rutgers is tough,” Meier said. “I’ve asked our kids to be emotional, because it’s going to be a very physical, athletic basketball game.”