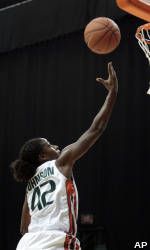 ATLANTA – The University of Miami’s Riquna Williams and Shenise Johnson have been named to the 2011-12 preseason Naismith watch list and are among women from 35 schools that are up for the national player of the year award, as announced today by the Atlanta Tipoff Club.

The 51-member list was compiled by the Atlanta Tipoff Club’s Board of Selectors, which based criteria on player performance from the previous year and expecatations for the 2012 college basketball season. The 2012 Naismith Trophy will be awarded at the NCAA Women’s Final Four in Denver.

Williams and Johnson have led the Canes to their current No. 9 national ranking and a 5-1 record heading into Thursday’s Big Ten/ACC match up with Michigan State.

The talented backcourt duo has previously been named to the Wade and Wooden award preason watch lists, also given to the nation’s top player.