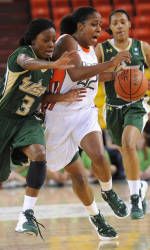 Johnson, the ACC Preseason Player of the Year and a preseason All-American, scored a game-high 18 points in a 72-55 victory over Alaska Anchorage in the Great Alaska Shootout’s first round, earning Player of the Game honors. In the tournament final against USF, Johnson nearly recorded a triple-double with 11 points, nine rebounds and nine assists. For her performance in the two games, Johnson was named the tournament’s Most Outstanding Player.

Johnson and the Canes won’t have much time to recover from a hectic week as they travel to East Lansing, Mich. to take on Michigan State on Thursday as part of the Fifth Annual B1G/ACC Challenge. The game will be shown on the B1G Network beginning at 8 p.m. EST.