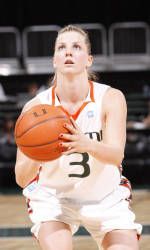 Miami Back Home to Face Longwood on Sunday

CORAL GABLES, Fla. – After a long week in Anchorage that saw the ninth-ranked University of Miami women’s basketball team win the Great Alaska Shootout, the Canes will welcome the Longwood Lancers to the BankUnited Center Sunday at 2 p.m.

THE GREAT ALASKA SHOOTOUT
The Hurricanes won their first Great Alaska Shootout in their third appearance in the event. A win over host Alaska Anchorage in the opening round a then over USF in the final gave the Canes the Championship.

In the previous two appearances the Canes had a combined 3-3 record.

ARE YOU SERIOUS?!
Miami senior Shenise Johnson is having a remarkable start to the 2011-12 season. The Preseason AP All-American and ACC Player of the Year leads the conference in several catergories and ranks among the best in others.

PROTECTING THE BANKUNITED CENTER
With Miami’s season-opening win over Texas-Pan American, the Canes won their 25th-consecutive home contest – setting a new program record. Miami has extended that record to 26 games after its 107-26 victory over Prairie View A&M on Nov. 17.

BIG TEN/ACC CHALLENGE
The Hurricanes will be playing in their second ever Big Ten/ACC Challenge when they travel to Michigan State to face the Spartans on Dec. 1 at 8 p.m.
The ACC has won each of the previous four challenges. Miami’s only other appearance in the challenge was a 65-50 loss to Michigan in 2007.

BIG TIME TEAM ON THE SMALL SCREEN
The Nov. 17 meeting with Tennessee was the first of 11 games that will be televised this season – a program record. Miami’s next televised contest will be part of the Big Ten/ACC Challenge when it travels to East Lansing, Mich. to take on Michigan State on Dec. 1. The Big Ten Network will provide coverage beginning at 8 p.m.

GETTING SOMETHING STARTED
Miami’s Shenise Johnson ranks third in the nation in consecutive starts made. Johnson has started all 104 games she has played in her career. Only Shekinna Stricklen of Tennessee (107) and Keisha Hampton of DePaul (107) have more consecutive starts.

CANES BACKCOURT NAMED TO POY WATCHLISTS
The University of Miami’s Shenise Johnson and Riquna Williams have been named to the Women’s Preseason Nominee List for the 2011 John R. Wooden Award. The duo has also been selected to the “Wade Watch” list for the State Farm Wade Trophy Division I Player of the Year.

Miami was led by the performances of seniors Riquna Williams and Shenise Johnson, who scored 24 and 17 points respectively.

However, an early second-half run from Tennessee broke the halftime tie and in the end, five Lady Vols scored in double-figures in the game, leading to a 92-76 Tennessee victory.

CANES OPEN SEASON RANKED SEVENTH
The Hurricanes, who finished the 2010-2011 season ranked tenth in the final ESPN/USA Today Coaches’ Poll, moved up three spots in anticipation of their 2011-12 season. The No. 7 ranking in the Coaches’ Poll is the highest rank in program history to begin a season.

The Hurricanes were also ranked No. 7 in the preseason Associated Press Poll.

Miami is currently ranked ninth in each the AP and ESPN/USA Today’s Coaches Polls.

MIAMI DUO NAMED TO PRESEASON ALL-ACC TEAM
The Preseason All-ACC Team is highlighted by the Miami senior guard tandem of Johnson and Williams. The two led the Canes to a 20-0 home record last season at the BankUnited Center.

MORE TO COME
National Player of the Year candidate Shenise Johnson ranks in the Top 10 of many categories for career records including points (4th), assists (6th), rebounds (5th), and steals (4th). Johnson is the only player in Miami history to be ranked in the Top 10 of all four of those categories.