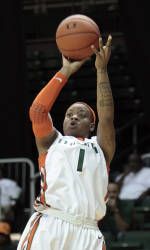 CORAL GABLES, Fla. – The ninth-ranked University of Miami women’s basketball team will be participating in its third Great Alaska Shootout and will face host Alaska Anchorage in an opening round contest Wednesday at 8 p.m. EST from Sullivan Arena.

THE GREAT ALASKA SHOOTOUT
This will be the third appearance for the Hurricanes in the Great Alaska Shootout, though in its previous two trips to Anchorage it was called the Northern Lights Invitational. Miami hasn’t participated since 1987.

In the previous two appearances the Canes have a combined 3-3 record and have played host Alaska Anchorage just one time, defeating the Seawolves 71-62 on March 1, 1987.

ARE YOU SERIOUS?!
Miami senior Shenise Johnson is having a remarkable start to the 2011-12 season. The Preseason AP All-American and ACC Player of the Year leads the conference in several catergories and ranks among the best in others.

GETTING SOMETHING STARTED
Miami’s Shenise Johnson ranks third in the nation in consecutive starts made. Johnson has started all 102 games she has played in her career. Only Shekinna Stricklen of Tennessee (107) and Keisha Hampton of DePaul (105) have more consecutive starts.

CANES BACKCOURT NAMED TO POY WATCHLISTS
The University of Miami’s Shenise Johnson and Riquna Williams have been named to the Women’s Preseason Nominee List for the 2011 John R. Wooden Award. The duo has also been selected to the “Wade Watch” list for the State Farm Wade Trophy Division I Player of the Year.

MIAMI DUO NAMED TO PRESEASON ALL-ACC TEAM
The Preseason All-ACC Team is highlighted by the Miami senior guard tandem of Johnson and Williams. The two led the Canes to a 20-0 home record last season at the BankUnited Center.

MORE TO COME
National Player of the Year candidate Shenise Johnson ranks in the Top 10 of many categories for career records including points (4th), assists (7th), rebounds (6th), and steals (5th). Johnson is the only player in Miami history to be ranked in the Top 10 of all four ofthose categories.

Johnson became the first player from Miami to make the preseason All-America team.

JOHNSON TABBED ACC PRESEASON POY
Shenise Johnson returns as the 2011-12 ACC Preseason Player of the Year. The senior was named the 2010-11 ACC Player of the Year, the first Hurricane player to win the award, and voted to last year’s All-ACC First Team and All-ACC Defensive team.

THREE-POINT STREAK
With 10 three-pointers against Prairie View A&M, the Hurricanes have made at least one three-point field goal in 328 straight games dating back to the 2000-01 season.

MIAMI VOTED ACC FAVORITES
The Hurricanes women’s basketball team has been predicted to finish atop the 2011-12 ACC Women’s Basketball standings for the first time since joining the league in 2004. The predictions were made by a vote of the Blue Ribbon Panel, consisting of national and local media, as well as school representatives.

The Hurricanes, who earned 30 of a possible 40 first-place votes, are coming off the ultimate turnaround in which the squad finished 12th in 2009-10 and then tied with Duke for the ACC regular season crown one year later. The 12 ACC wins last season were the most for the UM program in the league, while Miami also won 20 games for the 10th time in program history.

JOHNSON NAMED LOWE’S CLASS CANDIDATE
Shenise Johnson is one of 30 women’s basketball student-athletes from around the nation to be named a candidate for the 2011 Lowe’s Senior CLASS award.
To be eligible for the award, a student-athlete must be classified as an NCAA Division I senior and have notable achievements in four areas of excellence – community, classroom, character and competition.

An acronym for Celebrating Loyalty and Achievement for Staying in School, the Lowe’s Senior CLASS Award focuses on the total student-athlete and encourages students to use their platform in athletics to make a positive impact as leaders in their communities.