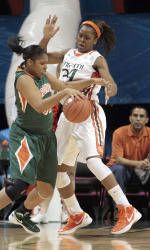 CORAL GABLES, Fla. – Coming off a disappointing loss to the No. 3 Tennessee Volunteers, the No. 7 Miami Hurricanes (1-1) will enter their contest against the Panthers of Prairie View A&M (1-0) with a renewed sense of excitement Thursday night.

“I am so proud of winning a championship for the University of Miami,” said head coach Katie Meier. “This athletic department celebrates championships and rings, so its fitting that we can carry on that tradition in women’s basketball.”

The Hurricanes entered their highly anticipated match-up with the Lady Vols eager for a win against a Top-10 team. Down by as many as eight points in the first period, the Hurricanes fought back to tie the game by halftime. Paced by senior guards Riquna Williams (24 points) and Shenise Johnson (17 points), the Hurricanes kept pace with Coach Pat Summitt’s Lady Volunteers for the majority of the game. Despite their hard-fought battle, however, the Hurricanes would fall to the Lady Vols by a final score of 92-76.

After one of their most difficult tests of the season on the road in Knoxville, Tenn., the Hurricanes will be returning home for another match-up against an NCAA Tournament team. The Panthers, who won the Southwestern Athletic Conference Tournament and qualified with an automatic bid, advanced to the NCAA Tournament for the third time in the past five years. The Panthers were bounced by No. 1-seeded Baylor University in the first round of the tournament.

Despite their selection as favorites to win the conference by SWAC coaches, the team returns only two letterwinners from last year’s squad that finished 21-12 (14-4 SWAC). The Panthers are led by Preseason All-SWAC First Team selection Latia Williams, who finished the 2010-11 campaign averaging 9.9 points per game.