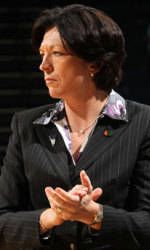 If that happens, maybe Summitt will regret that recommendation she made in 2001.

The story goes like this. Meier was vying for her first head-coaching job at Charlotte a decade ago. Summitt, the legendary Tennessee coach, made a phone call on Meier’s behalf. Not long afterward, Meier got hired, the first step on a path that now brings her to Knoxville, Tenn. for Tuesday night’s early season showdown between the seventh-ranked Hurricanes (1-0) and the third-ranked Lady Vols (1-0).

“She’s done that for 1,000 people,” Meier said. “So it meant a lot just to schedule this game. And I know it’s going to be emotional and inspirational.”

For a whole bunch of reasons, that is.

Summitt announced before the season that she has been diagnosed with early onset dementia, news that rocked the close-knit women’s basketball world, Meier included. The diagnosis has changed nothing for Summitt — she’s still the Tennessee coach, still driven to win and has a team this season that could very easily deliver her ninth national championship.

Meier has a team that enters the season as a realistic national-title hopeful for the first time.

And Tuesday might show how close the up-and-coming Hurricanes indeed are to the long-established Volunteers, who have won nearly 92 percent of their home games under Summitt.

“We’ve got a big challenge ahead of us playing Miami on Tuesday night,” Summitt said. “They looked very polished in their opening game. I can tell you, we are going to learn a lot about us in that game.”

Tennessee beat Pepperdine 89-57 on Sunday in its season-opener, getting 17 points and 13 rebounds from Glory Johnson and shaking off a relatively slow start before pulling away.

“We’re proud of our players for finishing, but we’ve got to get better,” Tennessee associate head coach Holly Warlick said. “We’ve got to get a whole heck of a lot better before Tuesday.”

Miami’s opener went largely the same way — slow start, fast finish. The Hurricanes tuned up for the Tennessee trip with an 83-37 win Friday over Texas-Pan American, though large stretches of the game left Meier less-than-thrilled.

“We can’t compete with Tennessee playing like that, let alone beat them,” Meier said.

With the level of competition going up big-time Tuesday, both teams figure the level of play will rise accordingly.

“We’re going to play our hearts out.”

Meier’s ties with Summitt started rather indirectly. Summitt knew Judy Rose — the athletic director at Charlotte — from graduate school. When Rose was floating Meier’s name as a candidate in 2001, Summitt offered her vote of approval.

Done deal. All four of Meier’s seasons at Charlotte were winning ones, even though the school hadn’t finished above .500 in the eight years before her arrival. And after three postseason trips, Meier was wooed away by Miami, which rocketed into the realm of the women’s basketball elite in the past couple years.

Meier, The Associated Press’ national coach of the year last season, knows her success has a lot to do with Summitt — and not just because of that recommendation, either.

“I take what she’s done very seriously and I think there are some great young coaches that take it very seriously,” Meier said. “My team knows. … Just the marketing that came out of Tennessee because of her greatness, because of who she is, she’s made it even, men and women. I know my team gets that.”

Summitt has said she wants her team focused on basketball, not the disease she’s fighting. Meier wants it the same way, and expects Summitt to be the same as ever.