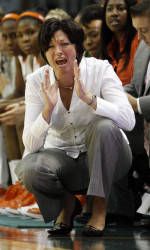 CORAL GABLES, Fla. – After an opening tune-up against the Texas Pan-American Broncs, Head Coach Katie Meier’s No. 7 Hurricanes will travel to Knoxville, Tenn. for an early season road test against the No. 3 Lady Volunteers in the State Farm Tip-Off Classic. The Tuesday night game, set for a 6 p.m. start time at Thompson-Boling Arena, will be nationally broadcast on ESPN2.

The Hurricanes, coming off an 83-37 rout of the Broncs at the BankUnited Center, will face off against one of the nation’s most storied programs in Coach Pat Summitt’s Lady Volunteers. Tennessee, who earned a No. 1 seed in the 2011 NCAA Tournament, advanced to the Elite Eight before ending their season against National Championship runner-up Notre Dame. It was the 27th time in program history the Lady Vols had reached the fourth stage of the NCAA tournament.

The Lady Vols return four of their top five scorers from last year’s Elite Eight team, led by SEC Preseason Player of the Year Shekinna Stricklen (12.8 points per game, 7.3 rebounds per game). Tennessee, who placed Stricklen and forward Glory Johnson (12.0 points per game, 9.7 rebounds per game) on the Preseason All-SEC First Team, were picked to win the SEC by a poll of conference media.

“We want to be a team that’s playing deep, deep, deep into March, and they always do,” Meier said of Tennessee. “We’ve gotta figure it out, there’s a difference. We want to close it.”

The Hurricanes, who finished the 2010-11 season 1-1 against teams ranked in the Top-10, are looking for an early signature win in Knoxville. The Hurricanes, coming off their first ACC championship in program history, are led by Preseason All-American Shenise Johnson, who nearly recorded a triple-double in the season opener against UTPA, and fellow All-ACC First-Team member Riquna Williams.

“It’s a big deal, not only for our team but for the University of Miami in general,” Johnson said of the match-up. “It’s going to be fun. It’s probably one of the highlights of the year for women’s basketball.”

The Top-10 showdown between Miami and Tennessee will be only the second game of the season for either team; the Lady Vols defeated Pepperdine 89-57 in their season opener.