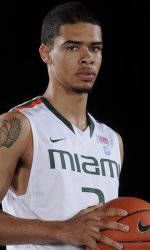 Playing basketball has given me the opportunity to do many things that my family has never done before. I’m the first in my family to actually go to college and do something better with my life, rather than being on the streets or something like that.

When I was introduced to Coach L, I was at my house. I didn’t know too much about him. He came down to try and convince me to stay with my commitment to Miami. I didn’t know too much about his background, but he explained a lot, about what he’s been through, who he knows, all of that. It made me realize that he’s a good man all-around and coaching-wise.

When I played basketball as a kid, I never really pretended to be anybody else. As I was growing up, mostly I was into Michael Jordan. Everybody will say he’s the best, if you watched his games and saw what he was doing, so I tried to be like him but I want to be one of the greatest.

The hardest part of being away from home is the food. Being so far away, the food is just not the same down here. I’m not used to eating fast food or any of that. I’m used to home-cooked meals, which I don’t have here.

The U is about legacy. The swagger about it, the toughness, the simple fact that it intimidates people when they step on the field or the court, that’s what the U is about.

At the U, I’ve learned so much from everybody. I’ve learned the same amount from every individual I’ve encountered. I don’t think I’ve been here long enough to say one person more than another.

Some of my personal goals are to graduate from college and make it past just college basketball. Maybe become a professional, either overseas or in the NBA.

Dunking is in my genes. When he was younger, my dad could do basically the same things I can do and probably even more. Athleticism is in my genes. The reason why it stands out is because it’s entertainment. More people like to see a dunk than a jump-shot or lay-up. The more you dunk, the more entertaining it is, and that’s just how the hype comes.

I don’t think people realize how fast I am until they actually see me on the court or see me play themselves. When Coach L came to me he told me he was looking for a running team, and that’s the type of system he liked. To get as many basket attempts as possible, I think it should help a lot, getting up and down the floor as fast as we can.

My pull-up jumper and decision-making are two of the stronger assets of my game. If you’ve never seen me play and only seen highlights, you wouldn’t know that.

Everybody on the team is equally close. We all hang out, go out together, whether it’s to the movies or going out to eat, we’re all equal. There are no cliques or anything, we’re just one big group.

Word of God was a great experience. I was there for three years, and was there for John Wall’s senior year. It was me and Dez Wells (Xavier) carrying on the legacy. There were up’s and down’s. We were tired from traveling and all that, but at the same time, we got to experience a lot of things kids don’t experience. The things we got to do, and the people we played with, are remarkable. There’s nothing than to do something at your best, and that’s what we did.

We went hard every day at Word of God, even with each other, just fouling hard and playing physical. We did whatever it took for us to get better. Going out there and doing it on the court, it was a great experience for all of us.

I have everything I want. I’m satisfied with what God gave me. He gave me what He gave me for a reason, so I can’t say I wish I had something else. If anything, I wish that, even though I work hard, that I work even harder. There are no physical attributes I wish I could have or anything like that, it happened for a reason.

Family is first. Whatever I do, I always have in my mind that I’m doing it for my family. I haven’t always had the best of anything, so I do it for my family back home, my friends, my circle. I don’t have a big circle, but I do it for them. I’m just trying to make it like everyone else.

I was raised to never quit. That’s one thing my mom and dad instilled in me growing up. Through tough times, when certain situations didn’t go my way, they told me to never quit. No matter what it was either. It could be to the point where I’m in the worst situation possible, but they never wanted me to quit. I always take situations like that, put the blame on myself, and see what I can do to make it better.