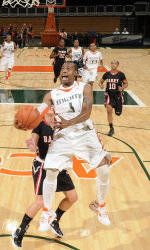 CORAL GABLES, Fla. – The seventh-ranked University of Miami women’s basketball team will open the 2011-12 season in front of its home crowd when it welcomes Texas-Pan American to the BankUnited Center on Fan Appreciation Day. Tip-off is set for 1 p.m.

The Canes return every single player from a season ago, including the ACC Preseason Player of the Year Shenise Johnson and fellow Preseason All-ACC Team member Riquna Williams. The 2010-11 season saw the Canes earn a share of the ACC regular season title and earn a No. 3 seed in the NCAA Tournament.

Led by Williams and Johnson, Miami trounced cross-town Barry University, 96-44, in its only exhibition on Monday. The backcourt duo each scored a team-leading 13 points and both only played 21 minutes.

Texas-Pan American is coming off a 12-19 season out of the Great West Conference. The Broncs are led by junior senior forward Adanna Opara, who averaged 17 points and nine rebounds a year ago.

Friday’s game, the first regular season game to be played in the country, will be the first between the two programs.