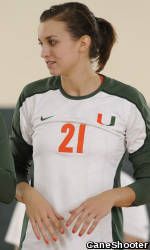 Miami Volleyball Takes to the Road for Four Match Stretch

Coral Gables, Fla. – The University of Miami volleyball team will hit the road this week/weekend as the Hurricanes travel to the state of North Carolina for a pair of matches in what will be the first two of a four-match road swing. The Canes will first face Duke on Thursday, Nov. 10 (7 p.m.), followed by Wake Forest on Saturday, Nov. 12 (5 p.m.) in the Old North State.

Miami takes a six-match win streak on the road when it competes in what has traditionally been a tough two-match skid along venerable I-40 in North Carolina. The Canes have not defeated the Blue Devils on the road since 2008, but took the previous meeting against them at home this year in Coral Gables.

The Hurricanes are led by the play of two seniors in All-America outside hitter Lane Carico with a team-leading 294 kills (3.59 k/s) and middle blocker Ali Becker with a league-leading hitting percentage of .398, also ranked 11th nationally in that category. Additionally, Carico ranks in the Top 10 in the ACC for digs with 345 (4.21 d/s).

Freshman middle blocker Emani Sims jumped into the Top 10 in the ACC for hitting percentage as the Glenview, Ill. native now boasts a .329 clip with 148 kills (1.87 k/s) and a team second-best 67 blocks (0.85 b/s). Sims is certainly a Hurricanes player to watch after redshirting during the 2010 campaign.

The defense uses Ali McCurdy with a team-leading 524 digs (5.76 d/s), also leading the ACC in that department.

Gray is ranked second in the ACC in hitting percentage as she totes a .395 clip into Thursday’s match. Setter Kellie Catanach sets up the offense with 993 assists (11.03 a/s).

SERIES INFO
All-Time Record: Miami leads Wake Forest, 9-4
Last Meeting: Miami won 3-0 on Sept. 30, 2011 in Coral Gables, Fla.
Series Streak: Miami won the previous meeting this year by a 3-0 decision and has won the previous four meetings in the series against the Demon Deacons dating back to 2008.

SCOUTING WAKE FOREST
Wake Forest is 4-11 in league play while holding a record of 7-18 overall on the year. The Demon Deacons are sparked on offense by the play of outside hitter Kadija Fornah with a team-leading 325 kills (3.49 k/s) and Carlin Salmon with 235 kills (2.53 k/s).

The libero for the Demon Deacons is Dani Thompson as she leads the squad with 380 digs (4.18 d/s).

Gallagher Picks Up ACC Weekly Honors
Redshirt senior setter Katie Gallagher was named as this week’s ACC Co-Player of the Week after helping UMiami to a pair of wins over UNC and NC State, respectively.

The conference leader in assists, Gallagher compiled 96 in the two-match stretch for a 13.71 average. In the win over North Carolina, she had 53 assists and had 43 against the Wolfpack. The Winter Park, Fla. native helped three players reach double-figure kills against the Tar Heels and four more against the Wolfpack. This marks her first award of the season and the second of her career.

Let’s Make It 20
The win last Friday over the University of North Carolina was the 20th of the year for the Hurricanes, giving them 20 wins in each of the last two seasons. It also marked the third time in the last four years the Canes have achieved the feat and the fifth time overall in school history.

Dig Pink a Success
The Hurricanes enjoyed their fourth consecutive year of success in helping raise money for the Susan G. Komen Foundation in support of Breast Cancer Awareness. This year, UMiami raised a considerable amount of money last weekend for its annual Dig Pink match against the University of Virginia on Friday, Oct. 28.

Always Bet on Becker
Senior middle blocker Ali Becker has surged onto the scene this year for the Hurricanes. The Katy, Texas native leads the league in hitting percentage and ranks 11th nationally in that category as she hits at a .398 clip. Becker also has a team second-best 254 kills (3.00 k/s).

Poll Position
The University of Miami is No. 26, respectively, this week in the AVCA Coaches Poll. In the Ratings Percentage Index (RPI), UM is No. 22 this week and is second amongst ACC schools in this week’s RPI, trailing only Florida State (No. 11).

Miami Says Farewell to Special Quartet
In its match against NC State on Sunday, Nov. 6, the University of Miami celebrated “Senior Day” for a special group of players that have undoubtedly been one of the best groups to ever play for the Orange and Green. The Hurricanes bid farewell to seniors Ali Becker, Lane Carico, Katie Gallagher and Christine Williamson, a group that has taken UM to consecutive NCAA Tournaments (2009-10) and looks to add another NCAA run to its belt in 2011.