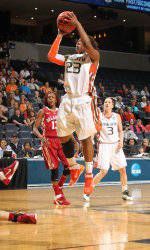 CORAL GABLES, Fla. – Head Coach Katie Meier’s seventh-ranked women’s basketball team will make its highly anticipated return to the hardwood with an exhibition game against Barry University Monday at the BankUnited Center. Tipoff for the game against the Buccaneers is set for 7 p.m.

The No. 7 Hurricanes, coming off their first regular season Atlantic Coast Conference Championship in program history, return every player from last season’s title run. Led by its senior tandem of Shenise Johnson (19.3 points per game, 8.3 rebounds per game) and Riquna Williams (21.7 points per game), the team is looking for a return to the top of the conference and a second consecutive trip to the NCAA Tournament. The Hurricanes finished 2010-11 with a 28-5 overall record.

Johnson, the first Associate Press Preseason All-American in team history, earned 2010-11 ACC Player of the Year honors and her second straight selection to the All-ACC First Team. Williams, who led the conference and finished 11th in the nation in scoring, is also coming off a selection to the All-ACC First Team. Forward Morgan Stroman (13.1 points per game, All-ACC Third Team) and sharp-shooter Stefanie Yderstrom (8.0 points per game) will play key roles for the Hurricanes, while newcomers to the team will also factor into Coach Meier’s plans. Transfer center Shawnice “Pepper” Wilson, who played two seasons at Pitt before joining the Hurricanes, and freshman guard Suriya McGuire, who was ranked the No. 7 player in the nation by Collegiate Girls Basketball Report, figure to play significant minutes in 2011-12.

The Buccaneers finished 2010-11 with a 12-15 overall record and an eighth-place finish (5-11) in the Sunshine State Conference (Division II). Barry returns three of their top four scorers from last season, including senior guards Yvonne Houston (13.5 points per game) and Shanna Suttington (11.0 points per game).

The exhibition game against Barry University is free and open to the public. Season tickets to the women’s basketball team begin for as low as $50. Click HERE for more information.