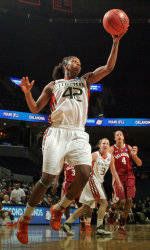 OVERLAND PARK, Kan. – The University of Miami’s Shenise Johnson is one of 30 women’s basketball student-athletes from around the nation to be named a candidate for the 2011 Lowe’s Senior CLASS award.

A 5-11 guard from Henrietta, N.Y., Johnson was named an All-American and ACC Player of the Year following the 2010-11 season, helping the Canes reach an ACC title and an NCAA tournament appearance. She is a two-time All-ACC Defensive Team performer, in addition to being a two-time All-ACC First Team. Earlier this week, she was one of five players named to the AP Preseason All-America Team.

Johnson comes into the season with career stats of 17.3 points, 7.7 rebounds and 4.2 assists per game. She also looks to continue her defensive success with nearly three steals per game in her career.

An acronym for Celebrating Loyalty and Achievement for Staying in School, The Lowe’s Senior CLASS Award focuses on the total student-athlete and encourages students to use their platform in athletics to make a positive impact as leaders in their communities.

Lowe’s, an official Corporate Partner of the NCAA, will announce the Senior CLASS Award winner during the 2011 NCAA Women’s Final Four, which will be played April 1 and 3 in Denver.

The 30 candidates will be narrowed to 10 finalists in late January, and those 10 names will be placed on the official ballot. Ballots will be distributed through a nationwide voting system to media, coaches and fans who will select one finalist who best exemplifies excellence in the four Cs of community, classroom, character and competition.

For a complete list of this year’s candidates, please visit seniorCLASSaward.com.