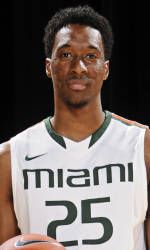 I was raised in Raleigh, NC. I was born and raised there. I was the only child and I had a lot of family to support me. When I was growing up I played basketball and soccer. Soccer was actually my first love. I played soccer until I was 13 or 14. It got way too hot in North Carolina, it’s like a dry heat, so I just stuck with an indoor sport.
I started playing basketball when I was five or six. Probably because that’s when those Fisher Price goals started coming out and I was dunking and all of your friends were talking about how high you could dunk on your Fisher Price goal.
I secretly wish I was five inches taller. I wish I was 7 feet. I feel like everything in basketball would be so much better if I was 7 feet.
I’m a Miami Hurricane because of my teammates, because of how they treated me so well on my visit. Also because I have a grandmother here and she always wanted me to visit more and it was awkward because I did not know I would be going here. Since I was an only child and really close to my family I thought I would stay in the state of North Carolina. But after taking a visit, I met my grandmother and just seeing her again here, I knew I would have another time here outside of school. She comes to games and tries to be the loudest one in the stands.
When I played basketball as a kid, I pretended to be Kobe Bryant, that was my favorite player. He still is, hands down. There was nobody else I imitated. I always watched Michael Jordan but Kobe was more of my time and he was doing all of the dunks and he was athletic and I stuck with him.
Playing basketball has given me something to do to keep me occupied and it is what I’ve been doing since I was a little kid. It’s one of the best things I know how to do. It’s kept me out of a lot of trouble.
My family is mostly from the East Coast. I probably have a family member in every state on the East Coast which is good because I always have support. My family is really strong and really close so my family is really big to me.
Competition is hard work and fun. Being born and raised in North Carolina, the ACC is everything. Competition is the most fun I’ve had, just being in this conference every night in and out.
The U isvery family orientated and a really nice community. It’s pretty much a small community and city and I really like it. I’ve been here for three years now. I haven’t had any problems.
When I was introduced to Coach L I was very nervous and excited. I was excited to see what he had to say. When we first met him it was right when he had his conference and his excitement to me was just incredible. It was something you just had to be there to see it and you could tell he took his job very seriously from the first day. Ever since then we’ve had a good time.
The hardest part about being away from home probably family, especially when I have five little nephews and to not see them grow up and they’re growing up with all women. I don’t really like that too much. I always wanted to be that male figure since I never had one. I had my father but I never had a brother. You miss a lot of events and stuff like that.
One thing everybody should know about Miami Basketball is it’s a different team this year. Coach L is really doing a good job of setting down a great foundation of fundamentals. He’s doing a really great job of just building character around the whole program and I think by the end of this year you’ll definitely see the change and when you watch us play it’s a big change.
I’m closest on the team with Durand and Reggie. Durand and I are in the same year. We’re the only two left of our class. Because we’re in the same year we’re usually in the same housing. For example last year Durand and I were neighbors and we were the only two who were always together and had a lot of time together. Reggie and I are both from North Carolina. I knew him before I came here so we go home, we plan trips together to go home. I go stay with him and he stays with me so we’re always together.
I’ll never forget my visit to the University of Miami when I was in high school. I took a lot of visits before I committed here. The thing I won’t forget is the family atmosphere. I felt coming down here, especially with my team, is kind of like I just fit in which is exactly what I was looking for. In basketball you’re always getting better but sometimes with people it doesn’t always work or it’s just different from you. With this group here, we all fit together and I just felt at home.