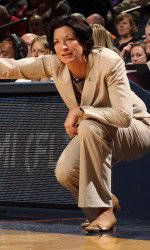 CORAL GABLES, Fla. – In the first USA Today/ESPN Top-25 Coaches’ Poll of the 2011-2012 season, the University of Miami women’s basketball team was ranked seventh nationally as chosen by Division I coaches.

The Hurricanes, who finished the 2010-2011 season ranked tenth in the final Coaches’ Poll, moved up three spots in anticipation of their 2011-12 season. The No. 7 ranking in the Coaches’ Poll is the highest rank in program history to begin a season. The Hurricanes were also ranked No. 7 in the preseason Associated Press Poll which released last week.

Miami returns every single player from a season ago, including Preseason All-American Shenise Johnson and fellow Preseason All-ACC Team member Riquna Williams. The 2010-11 season saw the Hurricanes earn a share of the ACC regular season title and earn a No. 3 seed in the 2011 NCAA Tournament.