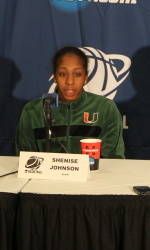 CORAL GABLES, Fla. – University of Miami senior guard Shenise Johnson has been named one of five players to the Associated Press Preseason All-America Team as announced on Tuesday.

“That’s a very savvy first team,” Miami coach Katie Meier said. “What strikes me is that all those kids share the basketball well. They are very versatile players.”

Johnson became the first player from Miami to make the preseason All-America team. She helped guide the Hurricanes to the Atlantic Coast Conference title last season, averaging 19.6 points and 8.3 rebounds.

“She’s done exactly what she set out to do,” Meier said. “She’s been the face of the program taking a leap of faith to come to Miami. It’s a moment for us having a player named to that team. We’re going to have fun with it.”

The Hurricanes were coming off a nine-win season when Johnson decided to come to the University of Miami. Now, the Canes are predicted to win the ACC again.

“It is an honor to be recognized with all these great players, but what really matters is that we reach our teams goals and hopefully I can be a part of the postseason team,” Johnson said.

The University of Miami’s Shenise Johnson and Riquna Williams have been named to the Women’s Preseason Nominee List for the 2011 John R. Wooden Award, as announced by the Los Angeles Athletic Club. The Wooden Award is considered the most prestigious individual honor in college basketball.

In the offseason, Johnson and teammate Riquna Williams were named to the 2011-2012 preseason “Wade Watch” list for the State Farm Wade Trophy Division I Player of the Year and the Women’s Preseason Nominee List for the 2011 John R. Wooden Award.

Miami welcomes Barry University for an exhibition game at the BankUnited Center on Nov. 7 at 7 p.m. The regular season gets underway on Nov. 11 when the Canes face Texas-Pan American in Coral Gables at 1 p.m.

The AP contributed to this report.