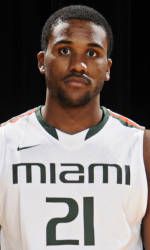 My favorite holiday is Christmas, especially because nowadays I don’t get to see my family a lot. It’s nice because I know everyone that’s when everyone takes vacation.

Nobody knows that I can play the guitar. I just started about two months ago, so that’s my new hidden talent.

When I was younger I wanted to be a professor. I also wanted to play professional soccer.

I secretly wish I could have a school year abroad.

Legacy represents your family name. I’ve always had that philosophy, which I think is old school. Everywhere you go you’re representing you’re family, which is why hopefully this year we have our names on the back of our jerseys.

The U is internationally known. It’s something that, no matter where you are, people will respect you or ask about you or how you’re affiliated. Either they have an interest, have heard of us or want to be a part of The U.

After college I want to play professionally. My two other dreams would be to do marketing for Nike or be a doctor.

My favorite quote is from my favorite movie Idlewild, “God don’t make no mistakes.” I know it’s a double negative, but I still like it.

Coach Larranaga is really influential in my life so far. His new philosophy towards how to approach the game in general is just a new twist compared to last year. His whole general outlook and philosophy that the whole coaching staff follows, I’m buying into it faster and just can’t wait for the season to start.

The actor I would want to play me in a movie is Dave Chappelle. Since he just recently got buff I think he could do it (laughs).