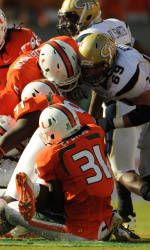 GREENSBORO, N.C. – For the third-consecutive week, University of Miami senior Sean Spence was named the ACC Linebacker of the Week as announced by the Atlantic Coast Conference office on Monday.

Spence was again the Canes’ leader on defense. The prolific linebacker played in the middle against the Yellow Jackets and racked up 10 tackles to lead all Miami players. The Miami native had six solo stops and a tackle for a loss of two yards. As the defensive captain, Spence helped hold Georgia Tech – one of the nation’s most potent offenses – to a season-low seven points, 35.9 off of its average.

Spence has been the anchor of the defense all season and has amassed 65 total tackles (10th nationally), 9.5 tackles for loss (seventh nationally) for 35 yards, three sacks for 23 yards and a forced fumble.

No other player at a BCS institution has won defensive player of the week honors for their conference three times. Only Mike Taylor, a linebacker at Wisconsin, has won it twice.

Miami will play in its second of three straight home games when it welcomes Virginia to Sun Life Stadium on Thursday. The game will start at 8:06 p.m. and will be televised on ESPN.