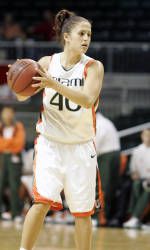 CORAL GABLES, Fla – Katie Hayek spent four years (2002-06) at the University of Miami playing hoops for the women’s basketball team and at the same time, earning her degree in theatre.

Soon after her graduation, Hayek nailed her audtion and earned a starring role in the upcoming film The Mighty Macs – the story of the Imacculata women’s basketball team that won three-straight national titles in the 1970s.

However, as filming was about to start, the Pennsylvania native was diagnosed with Hodgkin’s lymphoma.

On Friday night, the players on the current Miami team bought tickets in support of their Hurricane alumn, seeing Hayek walk down the red carpet in her first Hollywood film on South Beach.

Rudy Ruetigger on “The Mighty Macs” from Tier10 Marketing on Vimeo.