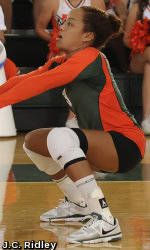 Coral Gables, Fla. – The 25th-ranked University of Miami volleyball team travels north this weekend for a pair of Atlantic Coast Conference matches at Boston College (Oct. 21) and Maryland (Oct. 23). The Canes play at BC on Friday at 7 p.m., followed by Sunday’s contest against the Terrapins at 2 p.m.

Miami (15-3, 6-3, ACC) will look to rebound from its first home loss last Sunday in a four-set match against the Georgia Tech Yellow Jackets. Since 2008, head coach Nicole Lantagne Welch and the Hurricanes are a combined 12-0 against Boston College and Maryland, respectively.

The Hurricanes are led offensively by five players hitting .249-or better, as well as four players with 100-plus kills. As a team, the Hurricanes are second in the league for kills, while also being ranked second in hitting percentage. As a unit, UMiami tops the conference charts in digs as well.

Joining Carico is Ali Becker (Katy, Texas) with 179 kills (2.84 k/s) and a team-leading 51 blocks (1.00 b/s). The senior middle blocker not only leads the league in hitting percentage (.380), but she is 21st in the NCAA this week in that department. The Texas native has developed nicely at the net for Lantagne Welch and her staff since her freshman year, and has been a force this year for the team in kills, blocks and hitting percentage.

Sophomore Alex Johnson (Tallahassee, Fla.) has 178 kills (2.83 k/s), followed by redshirt senior outside hitter Christine Williamson (Tampa, Fla.) with 133 kills. Johnson has also supplied defense for the team from her right side spot, adding 200 digs (3.17 d/s) in the process.

With three players averaging 3.00 digs or better, it is in fact sophomore libero Ryan Shaffer (San Jose, Calif.) topping the team in digs with 282 (4.48 d/s) as she ranks fourth in the league.

Redshirt senior setter Katie Gallagher (Winter Park, Fla.) leads the ACC in assists with 11.00 per set and ranks 30th in the nation.

With the first Ratings Percentage Index (RPI) poll released Monday, Oct. 17, the Hurricanes have the third-highest RPI in the ACC. UMiami is No. 24, while Florid State has the highest at No. 6, followed by North Carolina at No. 18. For Lantagne Welch, this is the highest RPI poll position for her program.

SCOUTING BOSTON COLLEGE
Over its previous six matches, Boston College has hit just shy of .200, but have allowed its opponents to hit at a .240 clip. Senior outside hitter Tsvetelina Dureva is the Eagles’ leader on offense, averaging 3.18 points and 2.94 kills per set. Fellow outside hitter freshman Courtney Castle is second on the team with 2.38 kills per set, while her 0.33 aces per set is the league’s second best.

Castle was named the ACC Freshman of the Week on Monday, Oct. 17 after helping the Eagles pick up their first conference road win since the 2009 campaign. In last weekend’s victory at Wake Forest, Castle charted a career-best 18 kills with just three errors for a .441 hitting percentage – the highest by a BC player this season. The rookie also produced 12 digs against the Demon Deacons to record her fourth double-double of the season.

SCOUTING MARYLAND
Sophomore Mary Cushman, and freshmen Ashleigh Crutcher and Adreene Elliott lead the Terps offensively. The trio has combined for 221 of Maryland’s 436 kills in conference play, while freshman Carlisle Abele has tallied 30 in the last four matches.

Junior setter Remy McBain touches the ball on every offensive play and has tallied 791 assists, second-most in the ACC. Her .291 hitting percentage is a career best and McBain is on pace to top her career high for kills in a season (146). Junior Caitlin Adams and Elliott lead the Terps in blocks. The two have combined for 144. Sophomore Sarah Harper continues to lead Maryland in digs with 349.