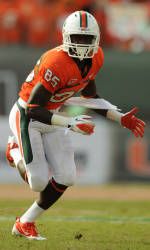 Miami's Phillip Dorsett Nominated for Geico Play of the Year

In addition to recognizing the season’s top plays, the one-hour CBS special relives the season’s greatest moments, players and traditions. The show also marks the culmination of the GEICO Mobile Marketing Tour, an interactive fan experience that visits 30 marquee games throughout the football season.

Down ten points in the fourth quarter, Miami went into their bag of tricks to pull closer to Virginia Tech. Quarterback Jacory Harris threw a backward-pass to Dorsett, who was lined-up on the far left sideline. Dorsett then proceeded to roll and threw a 16-yard floater on the run to running back Lamar Miller who dove to make a spectacular catch. To watch the play, go to: http://www.youtube.com/watch?v=aaLEi1WDdwc.

Dorsett’s trick-play touchdown is competing against three other plays from week six, including a one-handed catch from South Dakota’s Will Powell, a flip into the end zone from Sam Houston State’s Tim Flanders and a game-winning two-point conversion from Maine’s Chris Treister.

To watch or support Powell or any of the other highlight plays, visit www.facebook.com/BestofCollegeFootball. Fans can vote as often as they would like and share their vote with their Facebook friends. Week six voting opened today and ends Sunday, Oct.23, at 9:59 a.m. ET.

About Intersport
For 25 years, Intersport has been an award-winning innovator and leader in the creation of sports and entertainment based marketing platforms. Intersport provides turnkey solutions for global brands by combining two award-winning divisions: Sponsorship & Event Marketing and Television & Digital Media.  To learn more about Intersport, log on to www.intersportnet.com, like us on Facebook (www.Facebook.com/IntersportBuzz) or follow us on Twitter (@IntersportBuzz).