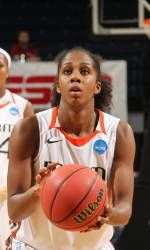 CORAL GABLES, Fla. – The University of Miami’s Shenise Johnson and Riquna Williams have been named to the Women’s Preseason Nominee List for the 2011 John R. Wooden Award, as announced by the Los Angeles Athletic Club. The Wooden Award is considered the most prestigious individual honor in college basketball.

Last season, the pair led the Hurricanes to a No. 3 seed and a second round appearance in the NCAA Tournament.

Johnson, a senior, is coming off a season in which she brought home a variety of awards. She was named ACC Player of the Year, State Farm All-America, First-Team All-ACC and to the All-ACC Defensive team.

The Henrietta, N.Y. native scored 19.6 points per game last season and added 8.3 rebounds, 3.8 assists and 3.2 steals per contest.  She was ranked in the Top 20 in the nation for both steals and points per game, while her free throw percentage of .846 was the best in the ACC. Johnson was named to the same watch list a season ago and was also on the finalist list in March as she was recognized as one of the Top 20 players in women’s basketball.

Williams was also named First Team All-ACC as she eclipsed 1,000 career points last season. She led the ACC and was 11th in the nation with 21.7 points per game. The native of Pahokee, Fla. also added 2.8 steals and 2.3 three-pointers per game.

The Wooden Award Preseason Nominee list, based on last year’s individual performance and team records, are the early frontrunners.

Transfers, freshmen and medical redshirts are not eligible for the preseason list. These players and others who excel throughout the season will be evaluated and considered for December’s Midseason list and the official voting ballot released in March. The National Ballot consists of approximately 20 top players who have proven to their universities that they are also making progress toward graduation and maintaining at least a cumulative 2.0 GPA.  The Wooden Award All American Team, consisting of the nation’s top five players, will be announced the week of the “Elite Eight” round of the NCAA Tournament.

The 36th annual Wooden Award ceremony, which will include the announcement of the men’s and women’s Wooden Award winners, a presentation of the Wooden Award All-American teams and the Legends of Coaching Award, will take place the weekend of April 9-11, 2012.

In August, Johnson and Williams were named to the 2011-2012 preseason “Wade Watch” list for the State Farm Wade Trophy Division I Player of the Year.

The Hurricanes open their season Nov. 11 against Texas-Pan American.