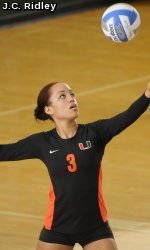 Last weekend, UM won its first-ever matches as a ranked team when the Hurricanes swept both Virginia Tech and Virginia on the road in the “Commonwealth State”. It was the first win for Miami at the University of Virginia since 2007.

Miami (11-1, 2-1 ACC) enters the weekend with an eight-match home win streak intact dating back to last year versus Duke. The Blue Devils were predicted as the preseason ACC champion by the league’s head coaches prior to the start of the season.

Now in her 11th year at the helm, University of Miami head coach Nicole Lantagne Welch and the Hurricanes will look towards a strong front line with Ali Becker, Emani Sims and Alex Johnson to try and record two more wins this weekend. Sims, a redshirt freshman, leads all players with 40 blocks (1.00 per set), while senior Becker is just behind her with 37. Becker ranks eighth in the ACC for hitting percentage (.350).

As a team, Miami ranks second in the ACC for kills per set (14.35). The Canes lead the ACC in digs per set for league matches. In their 11 wins on the season, the Canes have claimed eight sweeps against their opponents.

Each home match features live stats and video through HurricaneSports.com. The video is available through Canes All-Access, while stats are free by Game Tracker. The matches will also feature live radio commentary by WVUM – available at WVUM.org or 90.5 FM – the student-voice of the Miami Hurricanes.

Scouting Wake Forest
Wake Forest enters Friday’s contest with a 4-8 overall record and a 1-2 mark in the ACC. The Demon Deacons are 0-2 on the road this season.

Scouting Duke
ACC preseason favorite Duke comes into the weekend with a 9-4 overall record, but an unblemished 3-0 mark in the conference. The Blue Devils are coming off of a gutsy five-set win over Clemson last Saturday in a match that featured the second lost fifth set during the NCAA’s rally scoring era. The Blue Devils fought off six match points in that final frame to eventually claim a 25-23 fifth-set victory after trailing two sets to one in the fourth set.

Junior middle blocker Christiana Gray was named ACC Player of the Week for her performance last weekend. Gray hit .457 with 24 kills in the two victories and hoisted Duke to the win over Clemson by connecting on nine of her final 11 attacks without committing an error. Gray has hit .438 or better in three straight matches, all of which are Duke victories. The 6-5 middle blocker is part of a balanced Duke attack that features four players with at least 100 kills.

The Blue Devils gave UM its last home loss a season ago on the strength of an action-packed 3-2 come-from-behind decision.

Miami Storms Through Commonwealth State
Last weekend, the No. 21 Hurricanes swept through the state of Virginia defeating both Virginia Tech and Virginia with 3-0 decisions. For UMiami, it was the first time since 2007 it had beaten the Cavaliers of UVa on the road.